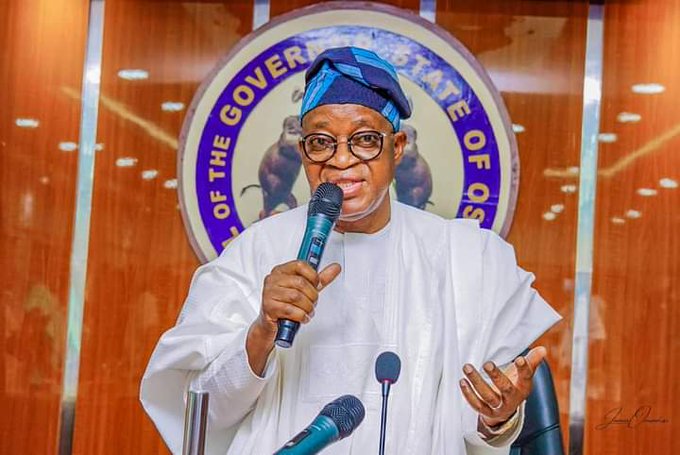 Workers in Osun have extolled Governor Adegboyega Oyetola for restoring their lost glory as his administration lived up to its word by swearing in 30 Permanent Secretary to crown the promises he made to them at this year’s Workers’ Day.
The governor had also kept his promise to end the era of Coordinating Director  which had hitherto been the nomenclature for same status.
Governor Oyetola charged the new Permanent Secretaries on competence, dedication, loyalty, discipline and effective service delivery as they assume the pinnacle of their career.
The State Chairman, Nigeria Labour Congress (NLC), Comrade Jacob Adekomi, lauded the Governor for his faithfulness to all the pledges made to workers, saying he has successfully restored their lost glory.
Recall that on the occasion of this year’s Workers’ Day, Governor Oyetola had promised among other things to conduct outstanding promotions nominally from 2019 to date and to appoint Permanent Secretaries to put an end to the use of Coordinating Directors in Ministries, Departments and Agencies.
The new Permanent Secretaries are: Engr. Kamoru A. Babalola; Engr. S. O. Ajao; Mr. M. A. K. Jimoh; Mr. R. A. Popoola; Dr. D. O. Ogunrinade; Mrs. J. K. Odediran; Mr. Oyesiku Adelu; Mr. Babajide Falade; Mrs. Funmilola Oyewole; Mr. O.A. Ogundun; Mrs. Bukola Aderibigbe; Mrs. Taiwo Oladunjoye; Dr.A. A Oni; Mr. Lekan Babalola.
Others are: Mrs. Sola Akinsola; Mr. K.N. Akintola; Mr. J. S. Adekomi; Mrs Jibola Falode; Miss AY Esan; Mrs C O Falade; Mr C O Fasina; Mrs Gbemisola Fayoyin; Mr MA Olawale; Mr SA Raji; Pharmacist Kunle Adebayo; Mr TO Akinwumi; Mr Richard Oyegbami; Mr Fatai Adekilekun; Mr. M.O. Obidiya; Engr. I. A Babalola.
Inaugurating the newly-appointed senior proletariats, Governor Oyetola said the appointment was made having found them worthy both in character and performance to be appointed to the administrative pinnacle of the State’s Ministries, Departments and Agencies.
Oyetola noted that his administration has successfully implemented all that it promised workers in May this year regardless of the outcome of the Governorship election.
This, according to him, is a clear indication that his administration is not a vindictive government but rather, one that has demonstrated within four years, the progressive ideals of the All Progressives Party despite paucity of funds.
The Governor further noted that the appointment of the new Permanent Secretaries had proved the doubting Thomases and naysayers who had wickedly portrayed his administration as being anti-workers wrong.
He called on the new Permanent Secretaries to consistently imbibe the principles of strategic thinking/planning and prompt implementation while rallying their subordinates to embrace same and global standards for optimal results.
“The position of Permanent Secretary is a position of trust, responsibility and leadership. By attaining this status, your sphere of responsibility and leadership has expanded as you are expected to lead your respective MDAs to success by leading from the front at all times.
“The Osun civil service you are invited to lead at various levels is a significant part and driver of the knowledge-and technology-driven bureaucracy that has delivered sustainable good governance, award-winning programmes and innovative policies in the past four years. You are invited to further fortify the team and raise the bar of service delivery in the State.
“As an administration, we envision the civil service as an effective driver of sustainable development, and successful service delivery as a process and not a destination. Therefore, you must realize that in a world governed by the New Normal and rapid changes, what got you here cannot achieve the effective service delivery we all seek and desire.
“You must, therefore, consistently imbibe the principles of strategic thinking/planning and prompt implementation while rallying your subordinates to embrace same and global standards for optimal results.
“The civil service of today has engaged in a paradigm shift whose contents are knowledge, technology, innovation, effective time management and results orientation. You must realize that when these new nuggets are mixed with the statutory kernels of competence, dedication, loyalty and discipline, effective service delivery will be on autopilot.
“The tool for constantly achieving and sustaining the above-mentioned skills is capacity building.  I, therefore, charge you to constantly build your capacity and those of your subordinates so that together, you can consistently drive and deliver the Osun of our collective dream”, he said.
Earlier, the Head of Service, Dr. Festus  Olowogboyega Oyebade, had applauded the Governor for appointing best of the best to the position of Permanent Secretary.
Olowogboyega further appreciated the Governor for his unalloyed support and kind gesture that had turned around the socio-economic fortune of the workforce since his assumption of office.
Speaking on behalf of the newly-inaugurated Permanent Secretaries, Comrade Jacob Adekomi, described the appointment as a round peg in a round hole saying Oyetola has restored their lost glory.
Adekomi who is the State Chairman, Nigeria Labour Congress (NLC), said their appointment is a testimony of the fact that Oyetola is a man of honour whose words are his bond.
“You have restored our lost glory. This has not happened in the last 10 years. There was even a time when promotion became a thing of difficulty, when half salary was the order of the day, when conversion became difficult, when three square daily meal became difficult for workers.
“You are creating history and removing stigma from the civil service. We can’t thank you enough. You have brought joy and happiness to us. Indeed, you are epitome of happiness. We shall not forget you. You made a promise to the whole world at our last Workers Day Celebration, and you have fulfilled your promise”, he added.
Tweet

Police Not Aware Of Court Order On Reinstatement Of Dismissed Officer
The Nigeria Police Force has stated emphatically that the office of the Inspector-General of... Continue
Izunaso May Have Conceded To Charles Ahize With His Resort To Blackmail & Court Shenanigans
ONWUASOANYA FCC JONES     If reports in the rumour mill is anything to... Continue
Goals Galore, As BSSA Mock World Cup Hots Up
Action continued last weekend, at the First Bank Sports Complex, Satellite Town, Lagos State... Continue
Shettima, Sanwo-Olu, Odunmbaku, Others Attend APC Crowdfunding App Unveiling Event
The Executive Chairman of Ojodu LCDA, Lagos State, Hon. Segun Odunmbaku, today attended the... Continue
Kasa Memorial Tennis Tourney Serves Off 2 December, 2022
The Tennis Section of the Federal Civil Service Club (FCSC) Awolowo Road, Ikoyi will... Continue
Senegal Battles Ecuador For Round 16 Slot On DStv, GOtv
Senegal’s hope of qualifying for the Round-16 is hanging on their ability to secure... Continue
Exam Malpractice: Oyo Govt To Sanction Principals & Parents Of Delisted Schools
The Oyo State Government says it will sanction Principals and Parents of recently delisted... Continue
Rumoured Relocation Of Federal Capital From Abuja To Lagos: Opposition Parties Should Stop Spreading Silly Rumour – APC PCC
The All Progressives Congress Presidential Campaign Council has carpeted the opposition parties for peddling... Continue
Cross River PDP And The Howling of A Disembowelling Party
BY CHRISTIAN ITA Responding to the Peoples Democratic Party, PDP in Cross River is... Continue
Glo Draws New Winners In Festival of Joy Promo
Globacom on Monday hosted a draw ceremony to pick a new set of winners... Continue